Die Walküre in Teatro Real, Madrid: love and conflict in a hopeless world. 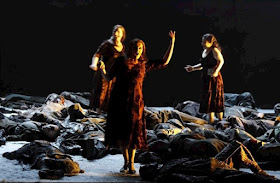 The "Eco-Ring" by Robert Carsen continues in Teatro Real, after a Rheingold last year with ups and downs. This Walküre has improved the levels in orchestra and voices specially. In 2003 we had a Walküre with Plácido Domingo and Waltraud Meier as the welsungs, who enraptured the audience, but Peter Schneider's conducting and Willy Decker's production didn't delight them very much.

In this conception, Carsen develops his Ring set in a polluted, post-apocalyptical world ruled by a fascist authority. In Walküre, the most popular opera in the cycle, we witness the origin of the conflicts which will change definitely the course of the story in the next journeys. This is also a work in which the internal struggle of the characters, tragically linked by fate and the enslaving pacts which Wotan begun. Here, marriages, conventions are unhappy: only the breaking of such laws like the affair between the Welsungs or the intention of Brünnhilde to desobey his father to help Siegmund are the only possibilities of hope. 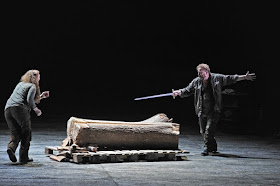 The metallic-like curtain opens during the prelude to show soldiers (Hunding's clan) setting an improvised military camp, and all characters dressed like as a guerrilla group, even with real dogs (one of them howled soon after the prelude). At the bottom, we see the snow falling to the around. Siegmund enters, dressed as an outlaw soldier. Sieglinde offers him tequila instead of mead. Hunding is an abuser, who slaps Sieglinde to fell to the floor. During the love duet, there are some cut wood trunks from which Siegmund takes Nothung. Act 2 is, aesthetically, the most beautiful set, a grey-concrete hall lavishly decorated. When the curtain rises, there is a reunion of fascist-like militars. Brünnhilde is a candid, but with a matron appearance, walkyrie who wears a brown dress. The Wotan and Fricka scene is presented like an aristocratic drama, discussing while the servants prepare coffee. Before leaving, she tries to caress her husband but she hold back. The second scene presents the welsungs arriving to a snowing place in a shabby truck. Act three was the strongest theatrically part of the show. The ride of walkyries takes place in the same Snowy place, where the dead bodies of fallen heroes are through all the stage. The walkyries awake some of them with a kiss (curiously, what will happen to Brunnhilde). The Magic Fire was a moving moment: Wotan has slept Brünnhilde and puts her on the snowy floor. Then he invokes the fire and after lighting a zippo lighter, the set at the bottom rises to show real fire on stage, illuminating the entire hall, as Wotan leaves while the curtain falls. 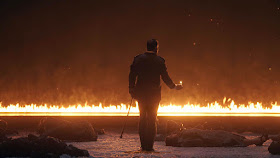 Pablo Heras-Casado conducted the Teatro Real Orchestra. Being these performances his debut in this work, he did a good job, even improving his conducting last year in Rheingold. He took from the orchestra a great sound, specially in the strings, which sounded well from the beginning. The prelude recreated the storm sensation. The tempi run fast, however. The orchestra peak was at the interlude between the Brünnhilde-Wotan scene and the arrival of the welsungs. In this moment the orchestra sound wagnerian, elegiac. The Magic Fire music was as tender and moving as the action on stage. I found this debutant directing better than the expert but rutinary one by Schneider in 2003. 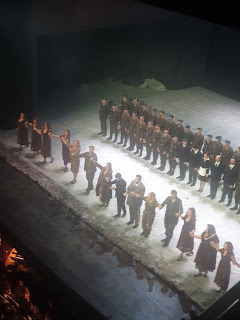 The second cast featured some of the most honest singers found today in European Theatres.

Christopher Ventris was Siegmund, with a beautiful, still youthful sounding voice (which is something scarce between present-day heldentenors), despite having some limitations during his life narration in front of Hunding, but singing accomplishedly in the duets with Sieglinde and in Act 2. His "Wälse" were well projected, but this task was descompensated in his final high note "so blühe der wälsungen blut" which was short-lengthed.

Elisabet Strid was an excellent Sieglinde, with a great dramatic soprano voice, getting better and better during the performance. She was very accomplished in her arias "Der männer Sippe" and "Du bist der Lenz". Great high notes and acting.

Ain Anger was also excellent as Hunding. His deep bass voice, his acting and brute characterization were well conveyed in his singing, resulting in an amazing portrait of the role.

James Rutherford sang Wotan. He has a nice  bass-baritone voice, good diction but he lacked some volume, what could be a trouble for the chief god, since some authority in his performance was missed. His Act 2 monologue was sung as a lied, instead of  an elegiac and monumental regret from the powerful divinity. He could finally gain some authority in Act 3, conveying Wotan's anger. His Farewell scene was sung again in liederistic style.

Ingela Brimberg was a honestly sung Brünnhilde. His first war cry was a bit nasal for me in the high register, but her rendition was good. She seemed to have reserved her voice for Act 3, when she sang marvellously, with the voice well projected, in the height of her singing. Her rendition of "Fort denn  eile" sound powerful, melancholic and full of dramatism in "War es so schmählich" and giving a final high note in "den felsen zu nahn".

Daniela Sindram was a good Fricka, beautifully sound and with nice high register and notes, but I missed some authority like her Wotan. Nevertheless, she was by far superior to Sarah Connolly's unadequate Fricka in Rheingold last year.

The walkyries were at a good level, and some of them even had a bigger voice than their famous sister, but after the Ride they had some descompensations. They had great acting, though. 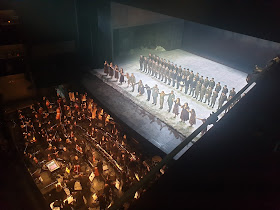 The Teatro Real audience is still feeling to see The Ring. This could be noticed at seeing more than of 90% of the seats occupied. That was an enjoyable performance, and I couldn't help being moved at the Act 1 prelude, at the "Winterstürme", at the Ride of the Walkyries or at the Magic Fire Music. I know I wasn't the only one, since the comments among the members of the audience confirmed yesterday there was just one absolute winner: Richard Wagner.