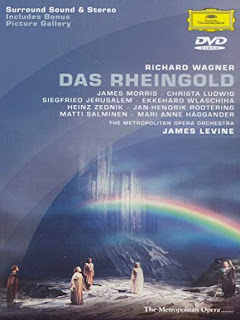 We begin this new year, 2019, with a Wagner review. Since this month Teatro Real is scheduling seven performances of Das Rheingold, I decided to make a first approach by watching the classic DVD from the Metropolitan Opera house, in the early 1990s. This DVD comes quite close my idea of how Rheingold should be.

This production is obviously improvable. We find ourselves in front of such a work, in which ambition, power, cowardice, betrayal, falseness, oppression, theft among leaders and even loyalty and fragility of the most disadvantaged which would need a modernisation. But thanks to this production I realised that even if it's set in its original background, seeing gods, dwarfs, giants, nixies and beautiful fantastic landscapes, we still could feel the impact and energy of the untemporal and universal message of the work.

Otto Schenk's classic staging, with the sets by Gunther Schneider-Siemssen and the costumes by Rolf Langenfass is the only major traditional version of Wagner's Ring in commercial video. This production has been blamed to be kitsch or even Hollywoodian, Wizard-of-Oz-styled. This has been the last traditional production in a major opera house. Technology, budget reasons or changing tastes would make this impossible to do or even demodé to some people in modern audiences. Seattle or Beijing try to continue this way of representing Wagner nowadays. 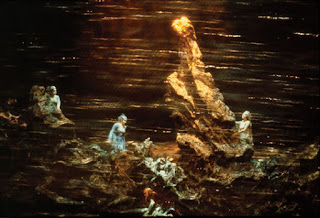 At the beggining of the video, we don't see the conductor greeting the audience, but the hall gradually darkened and the curtain lighted in blue, like the water flowing, while the Prelude is being played. The curtain opens to show us the depth of the Rhine, totally dark, with waves, in which its daughters are dancing and playing, and a big rock is in the middle, whose top would became the gold shining with the first beams of the sun. Alberich has a repulsive appearance and tries to pursue the fairy-like nixies. Act 2 is the best known image: a rocky landscape with Walhalla raising at the bottom, with the gods and giant moving around. We see Gods stacking the treasure around Freia. Erda's appearance from the ground lightens the stage in dark blue, and at the end, we see a beautiful rainbow conducting to Walhalla. Act 3 is also beautiful: a deep cavern, in the bottom the fire of the perpetual forging in orange light, totally black-coloured, giving a sensation of obscurity. Costumes try to assimilate the era of pre-Christianism in Scandinavia, but Loge's, Alberich's, Mime's, Fricka's and the giants costumes are among the best done.

James Levine is a great Wagnerian maestro. His conducting has the power and majestuosity required,as well as drama. While listening to the prelude, we feel the world being created, the water flowing, the orchestra sounding amazingly. The entry of the giants is one of the best conducted moments, with the percussion and winds sounding violently (but slower) as Solti's version. A reference version, definitely.

The cast was the best possible in those days, because singers are extremely accomplished actors and convey the emotions and psychological profiles of their roles. Dramaturgy is well developped, thanks to their acting skills. 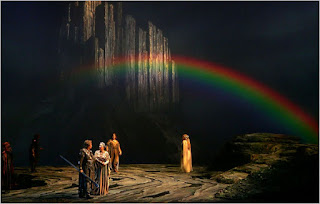 James Morris, in his style, knows how to sing Wotan and his voice sounds in good old school.

The legendary Christa Ludwig, 62 in the time of this video, has still a beautiful voice for Fricka and her gestures transmit a lot of class. Her acting is incredible: she starts scene 2 as a worried but full of energy, but after Fricka is taken by the giants and gods starts to age quickly, through her expressions we see an old and tired woman. That's why she has been one of the best Fricka ever.

Siegfried Jerusalem is an heroic Loge, but his acting portrays a resented and despicable deity. Ekkehard Wlaschiha was the Alberich of his time, thanks to his beautiful voice and deep portrait of the nibelung:  clumsy at the beggining while flirting with the Rhinemaidens, and a creepy tyrant in Scene 3. His curse aria doesn't make us to miss Neidlinger's rendition.  Heinz Zednik, is a veteran Mime (being only 50 years old), and despite sounding a bit older than in Boulez-Chéreau version, he is still a well sung and better acted Mime. He looks suffering as well as greedy and looking vengeance of his brother.

The rest of the cast is in a great level: Mari-Anne Haggänder's beautiful voice (her Eva in Bayreuth Wolfgang Wagner's Meistersinger made her known) suits to a Freia in trouble. The giants Fasolt and Fafner are sung beautifully by Jan-Hendrik Rootering and Matti Salminen. Birgitta Svenden's deep and impressive voice make a great Erda, Mark Baker and Alan Held sing nicely their parts as Froh and Donner respectively. The Rhinedaughters are also good singers, standing out Meredith Parsons' beautiful mezzo-soprano voice for Flosshilde.

This staging has been replaced by Robert Lepage's production based on a machine and special effects.  As I mentioned before, modernisation is needed for the universal message classical operas are still transmiting to modern audiences, but classical way of staging shouldn't disappear. We can see amazing and powerful regietheater versions in Bayreuth and elsewhere, but the beauty of the epic in which Wagner imagined firstly the work shouldn't be extinct, for the diversity of the art of staging.

Traditional and Regietheater productions should alternate, to enrich debate, not for a trend eliminating the other one dogmatically. 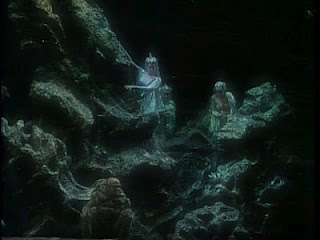