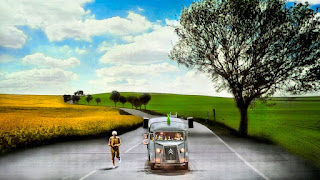 I want to celebrate the second year of my blog, and well as my 100th publication, with a review on the Bayreuth Festival telecast of the new 2019 production of Tannhäuser, conducted by Valery Gergiev and directed by Tobias Kratzer. This opera returns to Bayreuth after a 5 years absence, when the largely protested production by Sebastian Baumgarten was set for the last time in 2014, as well as televised.

Kratzer's vision for Tannhäuser could be defined as "tragicomical", since he relieved the work from part of its original tragical load. In acts 1 and 2 it has elements of a campy dark comedy, but act 3 is very tragic Like the most recent productions in Bayreuth, this one has an interesting and unusual idea: to set the action in Bayreuth and the Festspielhaus itself, what intensifies the irony and sense of comedy in this staging. 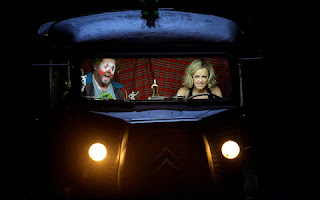 The Overture starts with a video showing landscapes of the Wartburg castle and forests. This forests are crossed by a highway and we see an old van, in which four friends are seen travelling nowhere: Tannhäuser (dressing in clown clothes), Venus (as an attractive anarchist activist), Oskar (the character Oskar Matzerath, from the novel "The Tin Drum", by Günter Grass, played by a dwarf actor ) and Le Gateau Chocolat (a black drag queen). The four are a gang, focused on thieving. In their way they find a Biogas factory being closed by "lack of demand", referring to the past production by Baumgarten. Suddenly, the group finds they are run out of food and fuel, so they go to a Burger King. While Gateau and Oskar steal the fuel from another cars, Venus and Tannhäuser try to pay the bill with a false card with the Wagner motto "Free in will, free in action, free in pleasure", but they are caught by a policeman. They react hitting him to death and run. The group is shocked, and the video finishes as the curtain rises. 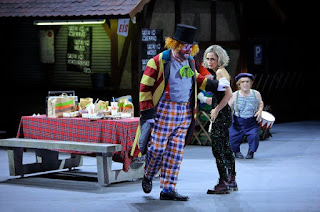 In the first act, the van arrives close to fairy-tale styled house, with statues of gnoms. The group starts to take their dinner, with the bags of Burger King visible. During the last time of their duet, Venus and Tannhäuser drive the van and argue. He leaves, and falls into a forest. The Shepherd comes close to him. She is a Blaue mädchen, the young doorwomen and doormen in the hall. The second scene is in the entrance of the Festspielhaus and the surrounding gardens. The pilgrims are the audience, dressed un luxurious gowns. Tannhäuser meets the knights, who are the singers of the Festival. 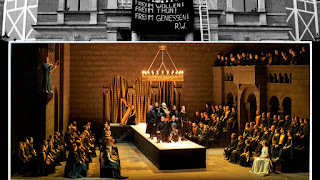 The second act narrates a performance in the Festspielhaus. Ironically, the sets are classical, simulating a stoned ancient Romanic hall, as well as the costumes, specially Elisabeth's dress. The "medieval" hall is surrounded by a big screen frame, projecting images of the action in the backstage. While the Guest March happens, we see Venus stealing the clothes of a Page to enter on stage. When Tannhäuser sings his hymn to the goddess, she reveals her real identity and Oskar and Gateau appear to join their friend. The outrage is such enormous and inmediate, so in the video on screen we can see a technic operator talking to a mysterious blonde woman, who takes the uncomfortable decision to call the police.

This woman is Katharina Wagner herself, making a cameo. The police arrive after the conmotion, and at the end of the act take Tannhäuser in arrest at the "To Rome" cry, while Gateau covers the harp with a Rainbow flag.

The third act opens with the van totally ruined, with Oskar living in poverty, and Elisabeth, which has lost her mind waiting for her beloved man. The pilgrims are now dressing like beggars. After her praying, she sees Wolfram dressed with the Tannhäuser clown (he has get to this extreme to fulfil his longed desire to her) and after taking him for Tannhäuser they have sex in the van. Tannhäuser appears like a beggar, barred from his singing community. At the end, Tannhäuser discovers Elisabeth to find she has killed herself. The final chorus is sounding off-stage, and he embraces her dead body, while a screen shows the lovers in the van, what should have happened if things had been different, and the curtain falls.

Valery Gergiev conducts the orchestra in his traditional slavic and metallic style, suitable for the Russian repertoire, more than for Wagner. The tempi are sometimes fast, sometimes dramatic. The Entry of the Guests and the Prelude to Act 3 were the best orchestral moments. The chorus conducted by Eberhard Friedich were excellent as usual.

Stephen Gould returns to sing Tannhäuser in Bayreuth, having debuted in this stage with this role in 2004. Vocally, he is already past his prime, but despite some trouble in high register in Act 1, his experience and command of the role made him to come back in his former glory and to sing the remaining acts with heroical voice, and using his limitations in Act 3 to give a tetric as well as an outstanding rendition of the Rome narration.

Lise Davidsen has been a complete grateful surprise, with a beautiful dramatic soprano voice, with some sounds reminding the good old school. She has revealed as a young rising star. Her scene in the Act 2 singing Ich flieh für ihn and the prayer in Act 3 were beautiful moments.

Markus Eiche was a good Wolfram, better than his 2014 rendition. His voice could sound a bit light, but his liederistic diction and singing are remarkable, and his performance improves as the it goes by.

Stephen Milling is an excellent Landgrave, with an interesting deep and dark bass voice, with good versions of the Act 2 monologues, and an amazing low register.

Elena Zhidkova is Venus. She has a nice voice, specially the middle register, sounding as a contralto, but the high notes are a bit troubled, and her singing lacks a bit of passion. However, her accomplished acting skills, plus her attractiveness, achieves a great portrait of the goddess.

Daniel Behle was a well sung Walther, as well as the pristine-sounded and charming voice of Katharina Konradi as the Shepherd. Kay Stiefermann was grey as Biterolf. This performance is the debut of the Spanish baritone Jorge Rodríguez-Norton in the role of  Heinrich der Schreiber, the third spaniard to sing in the green hill, after Victoria de los Ángeles and Plácido Domingo. 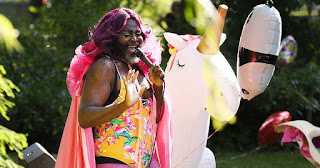 Despite their roles were a creation for this production, Manni Laudenbach as Oscar and Le Gateau Chocolat (who in the intermissions he does a singing show) as himself put the comic point to the show, making their appearances unforgettable.


This production has been applauded and booed at the same time, but undoubtedly we have to say that this is pure and good theatre. It's hoped to improve in the following years. Thanks to 3sat, many opera lovers all over the world can judge every new production and enjoy the magic from the Bayreuth Festival.

Here you can see, until 13 october, the video from 3sat:
https://www.3sat.de/kultur/festspielsommer/bayreuther-festspiele-2019-100.html