Video review: Wagner's Ring at The Met Opera, by Levine/Schenk 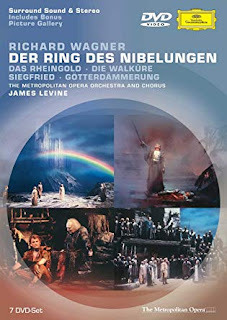 Regardless of its final result, every time one sees or listens The Ring, it is always  an adventure. From the first chord of Rheingold to the last one of Götterdämmerung the sensation while listening, watching or seeing live in the theatre is always as if you have lived a supernatural musical experience.

One of the most celebrated video versions of the Ring is the production at the Metropolitan Opera House, which happens to be the only classical staging of this work in the DVD market. directed by Otto Schenk, with the sets by Günther Schneider-Siemssen. This is praised by the most conservative wagnerians and opera fans for presenting The Ring "as it should to be set". Schenk's vision tries to be as faithful as possible to Wagner's libretto, presenting this story in the epic, mythical background the composer thought for it.  And during 20 years it was seen by the New Yorker audiences at least six times. The enchanting and naturalistic sets are the most important part of the production, being in the "Hollywoodian" style of the Met productions at that time. Here is seen most of the 'nibelung' props: swords, helmets, anvils, shields, horn-shaped long viking glasses, spears, etc. Rolf Langenfass's costumes are as traditional as they could be for their time, like in the Golden Hollywood era, very beautiful but maybe a bit dated for today.

However, the desired "accuracy" is not always successful: this production has been criticised to focus most of its attention to reproduce the norse settings than having also a convincing dramaturgy, and it's been said to be more the Schneider-Siemssen's Ring tan Schenk's Ring. Even when this could be true, fortunately the cast is very skilled in acting so they save the performance. 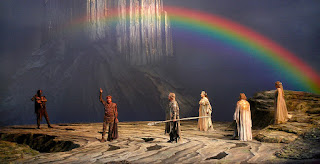 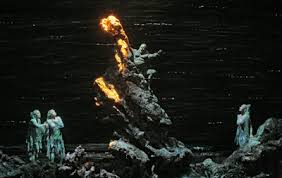 Das Rheingold is the most successful part of this set.I have already talked about it in January, so I will try to resume. As I mentioned in my linked entry, Schenk's Rheingold is close to how I imagine this opera in my mind. The sets reproduce successully the fantastic fairy-tale world of gods, giants and dwarfs. The first scene is reproducing the darkness of the deepth of the Rhine, close to Max Brückner's paintings, illuminated by the gold. The most achieved set is the second scene, with an imposing Walhalla dominating the landscape, with the rainbow in the final scene. 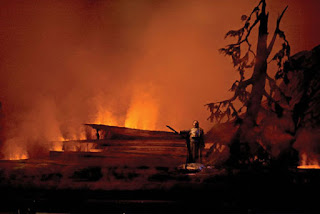 Die Walküre is, on the other hand, the least successful part. The plot is more dense and more obscure, but the production reinforces too much such obscurity with a lower lighting. The first act is a large, wooden hut, in the middle seen the ash where Nothung is. In the final love duet, the doors are opened and seen the trees and blows the wind, a call from the Spring. The second act is a mountain landscape. When Brünnhilde appears to Siegmund a shining light is seen, making a special moment. The third act is the walkyrie rock, well recreated in spite of the darkness, but the Fire Magic scene is spectacular, with the flames appearing as Wotan hits the floor with his spear, seen at the bottom and a light coming from heaven appears to give way Wotan to leave the scene while Brünnhilde sleeps. 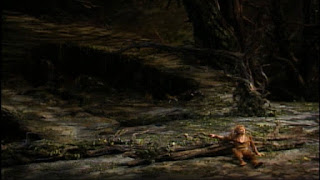 Siegfried regains the magic lost in Walküre. Mime's cave is well recreated with a big, overwhelming set of a cave with the forest seen at the bottom, and in the name of realism, we see a bear (an stuntman disguised), Siegfried forging his sword (One wonders if the tenor did took some lessons),and Mime preparing a potion with eggs and herbs. The forest is successful: it is seen quite dense, with the dragon's cave in the middle, The change from night to day is beautiful, and the forest murmurs are very special. The dragon, is one of the flops of the whole Ring, since it seems an unshaped mass of eyes, mouth hard to determine, more seeming a spider than a dragon. Act 3 is the most beautiful: after crossing the fire, Siegfried appears in the rock while a charming orange-like sunrise sky is seen to become a sunny and radiant one when Brünnhilde awakes. 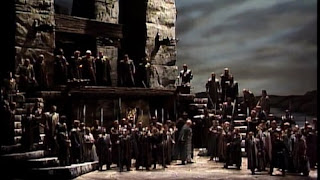 Götterdämmerung is the best part of this staging after Rheingold. The beautiful,  romantic sets fit into the solemn, dense and tragic drama. The walkyrie rock begins with a beautiful night landscape in the Norns' scene. The Gibichs' palace is one of the most achieved sets. The hall is a heavy, stoned two-floored building with a landscape of the Rhine crossing a valley, with a golden sunset sky. Act 2 shows the overwhelming façade of the palace, with two defying big towers dominating the scene. Wagner was ahead his time with his libretto, which foretold the cinema scripts, with such difficult scenes to be performed like the spectacular finale.
Schenk's version not only succeeds but also moves, creating an unforgettable scene: after Brünnhilde sets the pyre and jumps into it, the palace collapses, burning completely. The bottom of the Rhine is seen and the Rhinemaidens now play with the ring while Hagen sinks. Then, the Walhall appears in flames, collapsing too. The sky is turned dark blue and a shining light, maybe the sun, emerges from the dark, and as the Rhine is seen behind the ruins of the palace, the people comes to see the devastating scene and the curtain falls. This is the end of the gods' era, and the beginning of new opportunity for mankind, maybe a new hope. 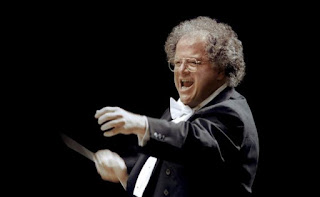 James Levine is the conductor of the cycle. He is an accomplished conductor, he is experienced with Wagner but his conducting is irregular. Rheingold is the best conducted, with a powerful, majestic sound from the orchestra. The percussion is astonishing in the giants' entry. However, in the following journeys he takes just the role of accompaigning maestro until he regains some energy and style from the Third Act of Siegfried, and in Götterdämmerung the orchestra gets some inspiration in the musical interludes.

The strings are in a full of grace state, with a big volume but exquisite and stylish sound in the preludes of Rheingold, recreating the waters in a Solti-like style, as well as the storm in the Walküre prelude. In Siegfried, the violas recreate with their beautiful sound the grimness of the Mime's cave. At the end, the orchestra enlarges the last chord as an elegiac end for the devastating Finale. 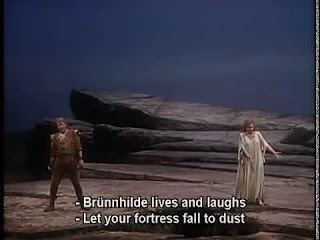 The cast features many of the best singers available at that moment for a Ring production. Not all of them were in their prime but their experience and accomplished acting render an unforgettable performance.

James Morris is Wotan. His voice has that personal sound, but his middle register beautifully used in Walküre, his impersonation of the god and solemnity and irony developped in Siegfried makes an A level performance.

Siegfried Jerusalem is Siegfried. His voice sounds a bit tired and with that particular timbre but still sounds as a heroic tenor. His characterization is excellent, conveying heroicity and slyness.

Hildegard Behrens is past her prime here, but she is still a great Brünnhilde. Her high notes are troubled, specially in her Hojotohos in Walküre, but she is sings very passionately in the love Duet of Siegfried. Her middle voice is still good but the low one seems fragile. However, her great scenical talent is present, portraying a tender, passionate, and strong heroine.
The Inmolation was as a result an unforgettable moment. 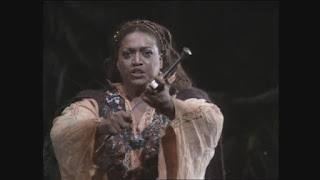 Jessye Norman is a good Sieglinde with her delightful, seductive voice and dramatic low register, with a lyric singing in the Act 1 duetos or in her intense performance at her brief scene in the Third Act. Gary Lakes is on the contrary a plain Siegmund, having the voice but not the proper performance for the character. His Wälse high notes are correct but at the end of the act he cracks his final high note.

Christa Ludwig is near her retirement in this recording. She plays both Fricka and Waltraute. Her class and singing elegance can still compensate her declining voice, specially her high notes. In Rheingold and Götterdämmerung she gives good performances, reminding a bit her past glory.

Matti Salminen is at his vocal peak. His amazing bass voice sounds here in all its splendor, with all the notes at their place and astonishing low notes. He plays both Fafner and Hagen, the latter a great portrait, showing the brutality and astuteness of the character. 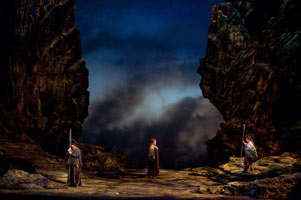 Heinz Zednik appears a bit aged vocally here after 20 years singing Mime in Bayreuth but he is still great as in the Boulez Ring. His voice has still a big volume and he even made me cry in the scene 1 of Siegfried when singing "Als zullendes kind". In spite of his evil greed he moves the audience when repproaching the hero his ingratitude with such singing. One of the stars of the cast.

Ekkehard Wlaschiha is an excellent Alberich in Rheingold, singing with full voice, creating an evil and clumsy profile of his character and singing a great rendition of the scene 4 curse. But in the rest of the work he is just correct, under his collleagues, specially Zednik and Salminen.

Kurt Moll sings a violent and dark Hunding, as brutal as Salminen's Hagen. Jan Hendrik-Rootering has a nice bass voice as Fasolt. Birgitta Svendén is a surprise as Erda, with a remarkable contralto voice, beautiful dark middle notes as well as the lowest, rendering an enigmatic and mystic Erda. Anthony Raffell and Hanna Lisowska are siblings Gunther and Gutrune, with adequate voices and interpretations. Lisowska has interesting low notes which come from her dramatic soprano fach.

The rest of gods, walkyries, rhinemaidens or norns are between a correct and good level, but not at the same level of the magnificent Bayreuth supporting roles. Among them are Dawn Upshaw as a charming Forest Bird, Mari Anne Haggänder as a nicely sung Freia or Andrea Gruber as the Third Norn, who was starting her career at that time. 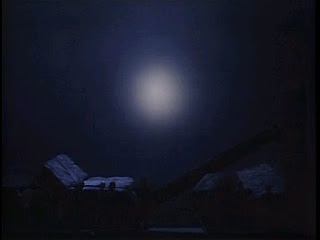 Despite its pros and cons, this is one of the last greatest Rings. Its talented cast and his classical,  mythical norse-like beautiful staging who was a way to perform and live opera not anymore seen in today opera houses, and sometimes really missed.