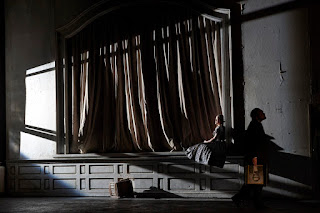 Every summer, Teatro Real sets a repertoire opera, and prepares its Opera Week, with a live stream worldwide via Facebook and by putting big screens in Plaza de Oriente with thousands of people attending the show. This summer the opera is  Donizetti's Lucia di Lammermoor, which hadn't been seen in Madrid since 2001, then with Edita Gruberova. Now, the Donizetti masterpiece returns with two renowned casts, an accomplished conductor, in a production from English National Opera, directed by David Alden.

This production sets the action in the nineteenth century, when the opera was composed. This shows us the gothic side of the story (after Walter Scott's The Bride of Lammermoor) by showing us a gloomy atmosphere through the dark-coloured costumes, the ruined Victorian house where the action is taking place, an oppresive world where the young Lucia is being deprived from her freedom to preserve the glory of her family.  Alden shows us the anxiety that she goes through before being sacrificed in a marriage of convenience: the curtain rises and during the prelude she wakes up desperatelym after a nightmare, or by showing us the persuassion  of Enrico (including scenes of harassment) and Raimondo. In the house, a little theatre is shown, where Lucia and Edgardo seal their love and after having killed her husband, she performs her own Mad scene with his dead body, like a macabre show to the guests For Edgardo it has the same treatment: the despair of a humilliated man, dying in front of the same guests and the photographs (graves) of his ancestors, not even to die  next to her beloved's body.  The result is an interesting work, removing the scene of any trace of aesthetical beauty in order to tell us the tragedy of this unfortunate lovers. 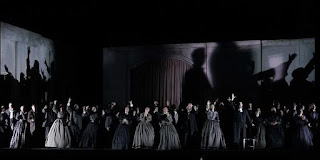 Daniel Oren  does a good job with the orchestra, but not reaching his own great level with La Favorite, months ago. His conducting reaches a dramatic style with solemn tempi, specially at the end of act 2. The opera  was performed uncut, and for the first time in Madrid the mad scene was played with a glass harmonica. The chorus sang in their usual splendid level. 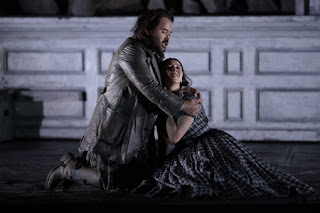 Lucia was performed by Lisette Oropesa and Venera Gimadieva. Oropesa is one of the best Lucias nowadays, with a delightful voice and skilled in coloratura, legato style and diction. And her acting skills convey the emotions of this ill-fated young lady. Her mad scene was largely ovationed.  Gimadieva has a good voice, and gave also a good performance, despite her high notes went through some trouble but her mad scene showed a good technique and was quite applauded too.

Javier Camarena was the star of his cast, by singing an unforgettable Edgardo. His beautiful voice,  his amazing style (including three spectacular high notes, two on duet with Oropesa and one in an oppure in the final aria) and his good acting (revealing the fury of Edgardo in Act 2 in the wedding scene) got an outstanding ovation from the audience. Ismael Jordi is one of the leading Spanish tenors and has sung Edgardo in many theatres. His voice is as beautiful as Camarena's, but a different style, sometimes from another time. In his final aria he sang in a pleasant pianissimo style.

Artur Rucinski and Simone Piazzola took the part of Enrico, Lucia's maligned sister. Rucinski has a great voice but Piazzola sang the role with dignity.

Roberto Tagliavini and Marko Mimica were Raimondo. Tagliavini is well known in Madrid and his singing was noble and gave a magnificent version of his racconto in Act 3. Mimica has been an astonishing discovery: his dark bass voice conveys the authority of his character, and its great volume surrounded the hall.

Yijie Shi was a complete luxury for the role of Arturo, with his first-class tenor voice and Alejandro del Cerro sang a fine Normanno with a great volume. Marina Pinchuk sang a correct Alisa, with nice high notes in the ending of Act 2. 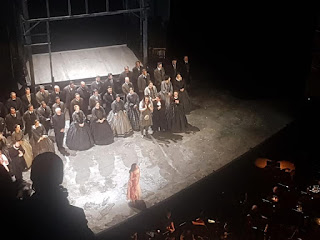 Venera Gimadieva and the second cast receiving the applause

The hashtag that Teatro Real created for this production is #LocuraConLucia (Madness with Lucia). Madness is the reaction (in good sense) of an audience pleased with this opera and these performances, revealed to be successful and among the hits in this Spanish operatic season.

My reviews are not professional and express only my opinions. As a non english native speaker I apologise for any mistake.
Most of the photographs are from the press and belong to its authors. My use of them is only cultural.