Only the Sound Remains in Teatro Real, Madrid. November 5, 2018. 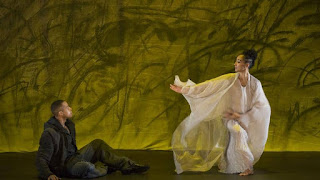 Kaija Saariaho is one of the most renowned musicians today. Her opera L'amour de Loin has been celebrated in the last two decades. After its world premiere in Amsterdam in 2016, her new opera Only the Sound Remains is being performed in Teatro Real, Madrid, in early November 2018.

The score is nice, mystical, full of intimism and spirituality. The title is actually a motto, the verification of a constant reality who is the link of the two operas making the show. The first one is Always Strong, the story of a priest who prays for the soul of a warrior, the favourite of the Emperor,, and how his ghost remembers his good old days and this makes him to fell into melancholy and finally disappears, remaining only his voice. The second opera is Feather Mantle, narrating the story of a fisherman who finds a mantle made by feathers, which belongs to an angel who needs it to return to heaven. The fisherman agreeds to give it back if the angel dances, and after the dance, the angel disappears. Both stories have a deep narrative, as they are taken from the japanese noh theater.

There is no smphony orchestra. Instead, there is a small ensemble made up of a string quartet, a choral quartet, percussion, flute and a kantele. In addition, it includes amplification and sound engineering. 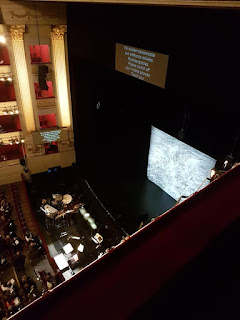 This opera is marking the return to Teatro Real, after many years, of the French counter-tenor Philippe Jaroussky, who sang in 2010 a historical Poppea under William Christie; and the director Peter Sellars, a current guest during the seasons of the late Gerard Mortier. Both artists gave the Madrid audience many glorious nights, and this one was just another memorable one. With Jaroussky, the baritone Davone Tines and the dancer Nora Kimball-Mentzos formed the  performing trio. 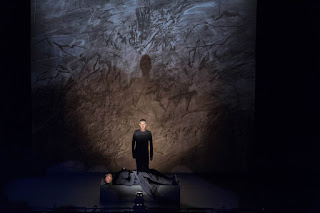 Sellars' production is the great success of the show. His work is beautifully simple, and  fits very well with the austerity of the music and drama. At entering in the hall, a wall painted by the famous painter Julie Mehretu is greeting the audience. In Always Strong we see the priest in a table invocating the ghost, and a spotlight put close to him projects the shadows in the wall.

Feather Mantle is by far the highlight of the show. The wall is now bigger, and we can appreciate better the force and the intensity of its streaks, and sometimes evocating a coast landscape for the drama. Here the dances are more intensive and also the lighting, reaching a great moment when the wall is lighted in yellow color, when the angel says doubt doesn't exist in heaven. The ending is powerful: the wall rises and the floor is illuminated in dark green and later in purple, with the rest of the stage empty excepting for the first smaller wall visible in the first part. As the angel and the dancer disappear, the baritone dances in trance and the chorus close the work, the scene gets dark slowly. 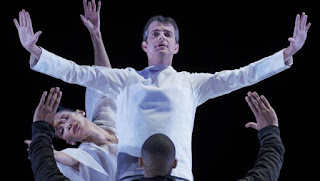 Jaroussky sings the spiritual roles with his beautiful and angelic voice, despite he is not in his usual repertory. He could solve the ascending notes in the score thanks to his skilled coloratura.

Tines sings the human roles. His baritone voice has a nice sound but a bit weak volume. He seems to dance accomplishedly the dances in the second opera.

Ivor Bolton was planned to conduct tonight, but after being indisposed, he was replaced with the Spanish conductor Ernest Martínez-Izquierdo, a Catalan composer and director of the Ensemble Barcelona 216. As a result, his knowledge on contemporary music leads us to believe the level was secured. 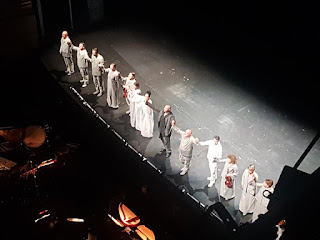 This work could be defined with an adjective: simplicity, and its accomplished management by the stage and musical work seems to state that we could be in front of one of the best moments in the current operatic season in Teatro Real. Well done.


My reviews are not professional and express only my opinions. As a non English native speaker I apologise for any mistake.
Most of the photographs are from the internet and belong to its authors. My use of them is only cultural.