Bellini's Il Pirata in Teatro Real: meeting one of the most dazzling bel canto scores. 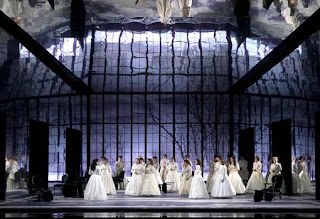 For the first time in its history, the Teatro Real is setting on its stage one of the most difficult and rare belcanto operas: Il Pirata, by Vincenzo Bellini. This opera is rarely performed because it requires singers able to cope with the difficulties of the score. Many tenors indeed, have been "afraid" of the difficult part of Gualtiero. In this occasion, for its premiere in this opera house, three casts featuring superstar, promising and accomplished singers are being scheduled in this demanding title. The theatre dedicated this run of performances to the late Montserrat Caballé, a legendary performer of the role of Imogene, and one of those great singers who helped to "resurrect" this opera and to set it in the repertoire again.

For these reasons, the expectations were high and in this performance a high number of seats were occupied. This production was premiered on November 30, with Javier Camarena and Sonya Yoncheva having a great success leading the first cast. This post is about the second cast, whose rendition wasn't behind the first one.

Bellini's score is one of the heights of the bel canto music, because of its challenging score, with its difficult coloratura and required technique. In addition, the orchestration tries to convey the drama, like the strings in the duet between Imogene and Gualtiero or the elegiac, solemn orchestral introduction to the Imogene's Finale. 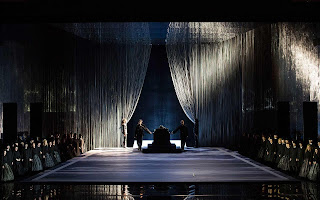 Emilio Sagi is the director of this production, and with the scenographer Daniel Bianco (both artistic directors, Sagi was at Teatro Real and Bianco in currently at Teatro de la Zarzuela) return to Teatro Real after their 2016 staging of I Puritani. Sagi has deprived the work from any realistic Sicilian medieval images and instead his Pirata is taking place in an oniric, psychological, magic and gothic world. To accentuate these characteristics, the production tends to some minimalism and Bianco's sets are mainly mirrors, sometimes the top one raises to show any idyllic winter landscapes. When the curtain rises, images of storm and raging waves are projected in the mirrors to accentuate the initial thrill. The best moments of the production came in the final scenes of Gualtiero and Imogene. The mirrors dissappear, and a stone grave is put in the middle of the scene, and Gualtiero appears to be judged. the scene becomes grey lighted. When Gualtiero leaves, at the bottom Imogene is seen to carry a great curtain over her arms (a symbol of her grief), and as she walks into the grave of Ernesto, the big black curtain falls to accentuate the heavy burden of this tragedy which has made her insane. All the stage is dark, with the grave only illuminated. At the end, when she notices her beloved lover is dead, she falls into the scene desperately. 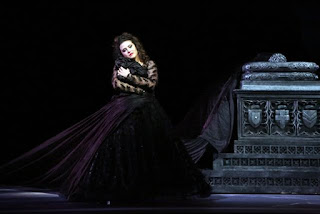 Maurizio Benini conducts the Teatro Real Orchestra. Known in this repertoire, his conducting started with an overture of average intensity. From the second act onwards, the orchestra got inspired, and specially at the end, with the woodwind section playing beautifully their parts in the orchestral interlude before the great final scene of Imogene. In addition, the volume of the orchestra respected the singers, never surpassing them.

The chorus were in their usual good level, specially in their opening number, succeeding at performing it with well singing and good acting and movements. Their final scene was sung with solemnity. The female chorus has to be mentioned, specially in the opening of Act 2. 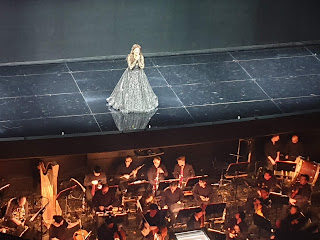 While entering the room, I was surprised to find a little paper given alongside the programme, announcing that Celso Albelo, the scheduled tenor for that night was ill and was replaced by Giorgio Misseri. Would Misseri cope successfull with such a part? His voice is of a leggero tenor, but the high notes were a bit troubled. However, during the second act he sang better and reserved his voice for his final great scene, where he gave all notes correctly and sounded well.

The true protagonist of this performance was the soprano Yolanda Auyanet as an accomplished Imogene. She commands the style, the coloratura and sings beautifully. Her middle register has a seductive, dramatic timbre, as well as the low ones. Her high notes are generally good (a few ones need to refine just a bit), and she ended the first act with an amazing one. During the finale scene, she gave an unforgettable rendition, with great singing and intense sense of drama.

The baritone Simone Piazzola sang an Ernesto full of nobilty, with a nice voice. He sounded powerful in the first act and moving (as the villain realizes he is an unloved husband) in the second act.

The supporting roles were well served by the veteran lyric bass Felipe Bou singing a great Goffredo, the soprano María Miró as a delightfully sung Adele and Marin Yonchev with his nice tenor voice as Itulbo. 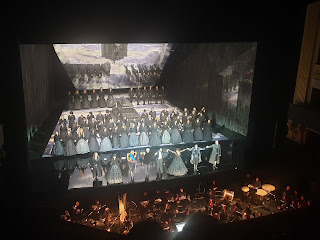 To perform this opera is always an event, and the second cast has succeeded in the terrible challenge of its score. And the audience applauded with enthusiasm after being conquered by the singers, musicians and Bellini. An opportunity not to be missed.

Any reproduction of my text requires my permission.
Publicado por Ángel Parsifal en 1:36