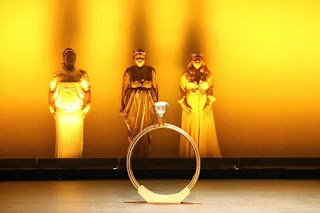 Wagner sung by an almost all African American cast? Why not? Ethnics are not important when his music is served with good, passionate singing. When I discovered Trilogy's version of Das Rheingold in Youtube I had a pleasant surprise.

Trilogy:aoc ( from an opera company) is a New-Jersey based opera organization focused in the works of black composers and stories about black people and their community. Its productions feature mostly black singers, but also from other ethnics groups since it embraces diversity. Since 2017, Trilogy has been working in their own production of the vast epic Wagner's Ring of the Nibelung; premiering an opera per year, and which will conclude in Spring 2020 with Götterdämmerung. The bass Kevin Maynor is the manager of the company, as well as the director of this Ring, and in the present video he sings the role of Fasolt.

The Ring is probably the biggest acid test of productions for any opera company: an 15-hour musical epic with a wide range of musical and dramatic possibilities. Just around 14 miles from the world-class Metropolitan Opera House and its amazing, luxurious Hollywoodesque Wagner productions, Trilogy has joined this titanic challenge and with limited resources, is producing the first Ring in the history of the New Jersey state. The Victoria Theatre in the New Jersey Performing Arts Center has been the venue of this Rheingold premiered on March 19, 2017. It's presented in Youtube in four videos, including explanations about the work's plot told by the artistic manager. To Maynor, the Ring is a contemporary masterpiece, and due to this reason he recommends African Americans to go to see Wagner even before Rossini or Mozart.

This production has used Jonathan Dove's reduced version for 18 musicians, performed in many little-scale stagings, and recently in London. In the video there are some cuts appreciated, and little music could have been lost to give way to Maynor's explanations, so the video lasts  around one hour and fifty minutes if we exclude them. The limited resources are compensated with a strong will. Given such circumstances, a modern semistaged production is provided.

The orchestra is placed at the right side of the stage, and three main elements are present on stage: a big Ring, Freia's apple of eternal youth and the Rhinegold. At the bottom a screen is seen projecting landscapes for every scene. In Scene 4 the use of lighting gives beautiful images: in Erda's scene, the screen disappears and the stage is lightened in a mysterious green light. And at the end, the Rhinemaidens appear at the bottom with a blazing golden yellow light.

TAOCarkeste is the regular orchestra of Trilogy's productions, in this occasion  conducted by Julius Williams. The orchestra seems to be new in Wagner music, however the woodwind section has some inspired moments, as well as the strings in the Prelude, despite the cuts. 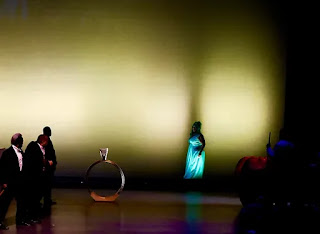 In the male cast, Donnie Ray Albert is a good Wotan, despite the voice has sometimes a gutural vibrato. However, I find his singing even better that most of the present-day Wotans sung in the major opera houses. Rodrick Dixon sings a correct Loge and very well acted, conveying the god's betraying irony.  Benjamin Bloomfield is a bass-baritone with experience in American theatres. Alongside David Gordon's Mime, he is the only white performer in the cast. Bloomfield's Alberich is interesting and well sung, as well as he shows an skilled acting, but light compared to Alberichs in major opera houses.  Maynor sings a tormented, big-voiced Fasolt, with a nice singing.

From the female singers, Nicole Mitchell is an enigmatic, beautifully voiced Erda, with a seductive timbre. Geraldine McMillian has a good voice for Fricka, Pamela Jones is a sweet, nicely sung Freia and Maria Marbet is a magnificent Flosshilde. 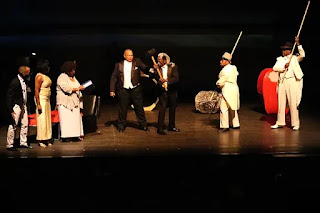 Wagner's works will always be cosmopolite whenever a wagnerian, in every corner in the world could feel, love and even performs them passionately. The Ring is a still valid epic tale, with an universal story of love, hate, ambition and hope. Trilogy has got this idea successfully and some of the Wagnerian genius has arrived to delight the New Jersey audiences.


In this playlist, you can see the four videos of this Rheingold.

Any reproduction of my text requires my permission.
Publicado por Ángel Parsifal en 3:41