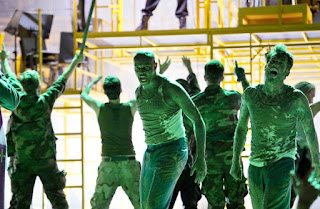 After 53 years, finally Bernd Alois Zimmermann's Die Soldaten saw its premiere in Spain. Since it was announced for 17/18 season in Madrid Teatro Real, there were great expectancy; and we have to say it was premiered quite accomplished. I attended the performance of May 24.

Zimmermann's only opera is one of the most difficult for being performed. The composer imagined once twelve scenarios around the audience, and Cologne Opera turned it down for being impossible. Despite this, the opera was finally performed in 1965, under Michael Gielen. It demands a massive orchestra of almost 120 musicians, it has too many characters, and the music requires a complete devotion from the singers.

The composer worked on many styles, compilating them. Indeed one of these was called "the collage". Zimmermann took precedent styles like serialism and fusioned them with his music. The score is demanding: the anguish takes us from the violent Overture and doesn't leave us until the final Pandemonium. The scenes of the Countess de la Roche are quite inspired and theatrical tension goes well with music.

If the music could be challenging, not less is the story: the libretto portrays the tragedy of Marie Wessener, the degradation, rape and final humilliation of a young innocent woman to the innermost depths of her being in a world full of pure evil.

For this occasion, an stunning production from Zurich Opera and Komische Oper Berlin, signed by Calixto Bieito was the chosen to show this terrible atmosphere. 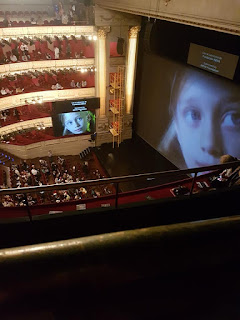 Bieito has done an stunning work, reflecting the violence of the score. While audiences are entering in the hall, we can see in the curtain the image of a blond and beautiful child. She is the image of the innocence previous to the tragedy. At both sides of the scenery, big screens and stairs are seen.
When the curtain rises, there is on the stage a big yellow plattform where the orchestra is disposed. The conductor and musicians are dressed in military uniforms, suggesting in our minds that they could be soldiers, that among battles they form an orchestra and play this music, reflecting their routine. The orchestra pit is covered, to be the space where singers will move and perform. Soldiers are represented as the quintaessence of violence: they are brutal, dirty and frightening. The officials find pleasure on torturing their subordinates, or for example the soldiers sexually brutalise a woman or Stolzius by crushing him and moving a lantern near his eyes. In the screens at both sides of the scene, we see how the men film closeups of Marie, as a sexual object or the orgasmic expressions of Desportes, presumably having sex with her. 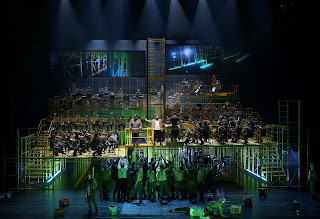 The ending is the most shocking part. After being rejected by the evil Countess of la Roche, Marie is seen raped by a soldier and hold by other people, after used as chair and table to serve drinks by the same male characters who destroyed her, now degradating her as an useless object. Meanwhile, from different point of the hall many noises of soldiers coming could be heard, and finally the bloodcurling screams of the final Pandemonium from the top. A fully bleeding Marie raises her arms to the public, waiting for destiny with the full cast while in the lateral screens the tender child appears now dead. And the lights turn off.

Pablo Heras-Casado made an accomplished task  with the Teatro Real Orchestra. He could obtain from it an stunning sound. 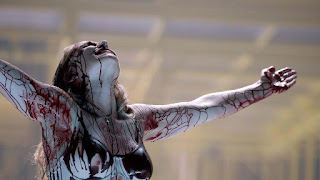 The cast was led by the amazing performance of Susanne Elmark as Marie. This danish soprano took her voice and acting skills to a supreme grade. Her voice sounds generously and she portrays the innocence of Marie who is gradually broken. An unforgettable performance.

The rest of the singers made a great job, with Pavel Daniluk as a great Wessener of a dark, deep voice. Leigh Melrose did well his part as Stolzius, or Noëmi Nadelmann portrayed a suggestive but wicked Countess de la Roche. Uwe Stickert was Desportes, both well acted and sung. Iris Vermillion was one of the surprises of the night, with her marvellous deep voice.

Unexpectedly, the legendary german mezzosoprano Hanna Schwarz played the role of Wessener's mother. I saw as Siegfried's Erda 15 years ago and I couldn't imagine she was still active. Her role is small (the lament and warnings to her granddaughter about her heinous fate), but her voice sounds still beautiful  despite aging. It's a pleasure to see such a legend on stage. 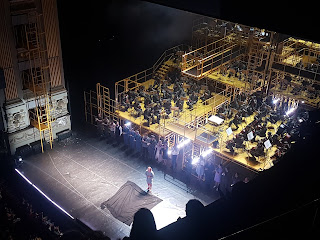 This is not an easy opera to listen. But its condition of one of the most relevant operas of late 20th Century, its demanding but interesting music, its universal story and its rare productions make this performances necessary. Despite the desertions and the empty seats, the remaining members of the audience welcomed the show very well. Die Soldaten couldn't have been presented in Spain with a better honor.


My reviews are not professional and express only my opinions. As a non english native speaker I appologise for any mistake.
Most of the photographs are from the press and belong to its authors. My use of them is only cultural.
Publicado por Ángel Parsifal en 15:47